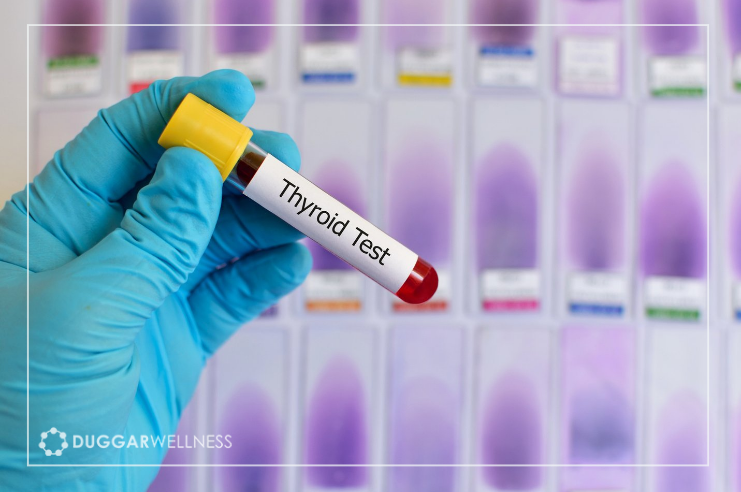 Virtually every week I consult with a patient that is complaining of fatigue, lethargy, depression, dry skin, cold hands and feet, and weight gain. Some of them have suspected a thyroid problem but insist that their medical doctor has tested for that and they were “normal”. Unfortunately, more often than not, I find that their doctor only did a very cursory lab test to make that determination. Many of you are aware that in functional medicine, we tend to look at things a bit deeper and it so happens that thyroid conditions are a classic example of where the functional approach really shines so let’s explore how we evaluate thyroid function in our office.

It’s estimated that close to 30 million Americans are suffering from low thyroid function but the mainstream doctors have been stuck in their clinical model for so long that they miss a large number of people and therefore this number is significantly under reported.

Mainstream medicine has been taught that the primary tool for evaluating thyroid function is a blood test marker called Thyroid Stimulating Hormone (TSH). TSH isn’t a “thyroid” hormone at all but rather a hormone produced in the brain that is meant to signal the thyroid to increase the production of thyroid hormones.  The concept is that if the body doesn’t have enough thyroid hormone available, the brain gets the signal from the body and it will, in turn, send a message to the thyroid gland to increase production. Simple right? Unfortunately, much to the dismay of every physiology student and doctor, functions in the body are never that simple.

It turns out that there are really several versions of the “thyroid” hormone that the thyroid makes.  Close to 93% of the hormone actually secreted from the thyroid gland is in the form of what is called “T4”. Now T4 is not very active. In fact, it is more of a “storage” form of thyroid hormone and in order for our cells to use it, it has to first be converted to T3. T3 is active thyroid hormone. This process of conversion is a very critical piece of the puzzle for the millions of low thyroid people out there so let’s dive a little deeper into this process to see what could be going wrong.

The conversion of T4 to T3 takes place mainly (60%) in the liver through processes called glucuronidation and sulfation. Basically, specific liver enzymes are used to make the conversion but if there is any liver congestion or deficiencies of key nutrients needed for this process, the net result will be low levels of active T3.  Another 20% of the conversion takes place in the gut and is done by healthy microorganisms. When the normal microbes aren’t there, we lose more active T3.  The last 20% of the conversion can be compromised by too much of a stress hormone called cortisol.  In the presence of cortisol, instead of creating regular T3, the body creates something called “reverse T3”.  This reverse T3 looks like regular T3 but is altered just enough to make it totally unusable by the cells.

Can anyone see a problem here?  Does anyone not know that we are all dealing with some level of liver toxicity, stress, and altered gut microbes?  The modern lifestyle is “triple-teaming” against our thyroid.

Another Major Blow to the Thyroid Gland

If the problems associated with adequate hormone conversion weren’t enough, we have an even larger issue to contend with. It turns out that over 80% of all hypothyroid conditions also have a component of autoimmune reactions taking place. The medical diagnosis is called Hashimoto’s thyroiditis.  To put it simply, the patient’s immune system is getting triggered into attacking itself.   I find that this large piece of the puzzle is completely overlooked in the vast majority of patients complaining of thyroid-like symptoms and even when it is found, the traditional model of treatment is only to replace the missing thyroid hormones with a synthetic hormone. No attention is given to understanding what may have triggered the immune system to go “rogue” in the first place so it continues unabated until the thyroid is damaged beyond repair.

Research has been able to come up with several mechanisms that may work together to trigger the immune dysfunction that is behind this. One interesting connection seems to be to the protein found in wheat called gluten.  Turns out gluten can cause lots of problems even in people who don’t have Celiac disease. Due to some of the environmental challenges listed above (toxicity, stress, nutrient deficiencies, and altered gut bugs) our digestive system can become “leaky” and allow incompletely digested proteins into our bloodstream. When gluten proteins get into the bloodstream, the immune system mounts an attack on the foreign protein and we have a “gluten sensitivity”. What is unfortunate for us is that the gluten protein “looks” similar to some of our own proteins. The researchers call this “molecular mimicry” and it results in an overactive immune system targeting the attack on our own cells.

Another compelling line of investigation is looking at the role of chronic viral infections. It is possible that viruses like Epstein Barr virus and others can enter into the thyroid cells and alter them enough so that the immune system destroys the cells in an effort to eradicate the virus.

Regardless of the ultimate reason behind the destruction of the thyroid tissue, medicine’s current model of simply replacing the low thyroid hormone does nothing to restore balance to the immune system!

So What Tests Should Be Run?

In my opinion, it makes no sense at all to even bother running a TSH test if you aren’t going to run a complete thyroid panel because TSH levels can be misleading at best and completely irrelevant at worst.  A complete thyroid panel should include all of the following:  TSH, T4 (both Free and bound versions), T3 (both free and bound levels) reverse T3, and thyroid antibodies (thyroid peroxidase or TPO and anti-thyroglobulin or TGA).  If either of the antibodies is outside of normal range it should trigger a test to determine if there is a “leaky gut” as well as if there is any gluten sensitivity.

If there is no autoimmunity but the other thyroid hormones are out of normal range, efforts need to be directed at restoring the gut flora, supporting the liver, lowering stress hormones and improving key nutrients like vitamin D, B12, folate, magnesium, selenium, and iodine.

Other findings on lab tests can also be associated with thyroid dysfunction. Make sure you check for anemia (either b12 or iron deficiency), homocysteine levels (which can be a sign of poor methylation which can affect thyroid function) as well as C-reactive protein (a marker of inflammation).

Some medical doctors simply won’t run this comprehensive test panel but we have arranged a special price with Labcorp to test all of these as part of our Opti-Internist panel. Regular billing prices for this test would be well over $1,000.00 but our patients can get it for around $260.00.

If you are suffering from any of the symptoms mentioned above, even if you are already taking thyroid replacement hormones, there is a very good chance that you could be doing more to restore your thyroid health. Schedule a review with me and we’ll discuss the best next step for you.

What are you doing for your thyroid health?

4 responses to “The Functional Medicine Approach to Thyroid Health”