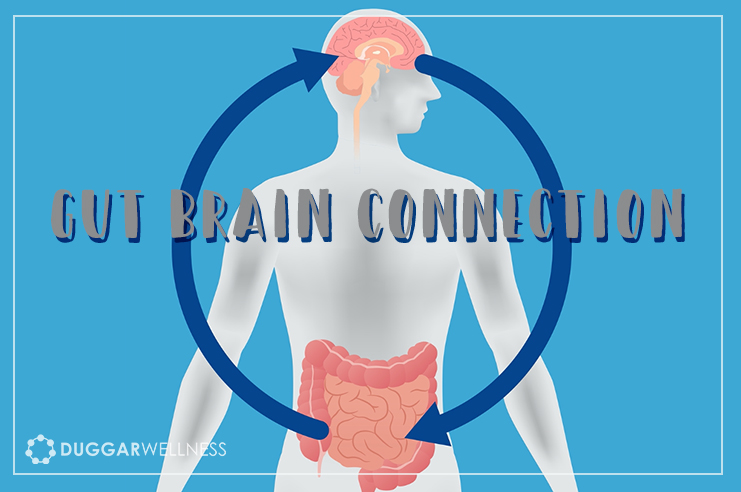 One of the most challenging and exciting aspects of working from the Functional Medicine model is that it demands that we recognize that everything is interconnected in the body. Instead of looking for single causes for health complaints, we search for patterns and correlations that create an environment that pushes the body into a state of compensation that isn’t good for the long-term well-being of the body.

One of the most fascinating relationships that has been uncovered is how the nerve system, digestive system and hormonal system are linked together and how dysfunction in one area can lead to breakdowns in the other two.  Let’s explore how your stress system, gut, and brain are connected in health and disease.

In our world today, most people associate the word “stress” to mean emotional and psychological pressure or trauma like worrying about a big project at school or work, starting a new job, traffic, or financial downturns.  We rarely consider that some “positive” events can also be stressful like getting  a new job, getting married or having a baby.

Another element of stress that most people don’t consider is that there are physical and chemical stressors as well. Sitting for prolonged periods, slips and falls, working out, under eating or over eating, not getting enough sleep or even eating foods that you are sensitive to are all stressful to the body.

When it comes to stress, our body has a pretty rudimentary response that is virtually the same, regardless of the different stress that triggers it.  When we perceive something to be stressful, our brain triggers a “fight or flight” mechanism that starts the production of a cascade of hormones to be released. Particularly important for our discussion today is the role of the hormone called Cortisol. This is produced in the adrenal glands in response to signals from the brain and is a powerful controller of bodily functions.  In the presence of high cortisol from stress, they body shifts into survival mode. Virtually every possible system is affected as the body prepares to fight or flee.

Blood flow decreases in the organs of digestion and instead is shunted to the heart, brain and extremities. This is of course the right adaptation if we are really in a life or death situation but more often than not, the situation is much less life-threatening and so we are mismatching our body’s response to the “real” environmental need.  Chronic stress quickly leads to stomach pain, malabsorption, bloating, constipation, diarrhea and may even lead to serious problems like SIBO, IBS, IBD, food sensitivity/intolerance and leaky gut.

There are several mechanisms at play that translate chronic stress and gut problems. First, when cortisol is elevated it causes the body to be in a state of “breakdown” instead of healing. The body loses high levels of critical amino acids in this process and these amino acids are important for maintaining the gut lining. In particular, the amino acid L-glutamine has been shown to be essential in keeping the gut lining strong and healthy and high stress will lower L-glutamine levels.

In addition, the same hormone released in the brain that triggers cortisol to be released from the adrenal glands also signals the activation of immune cells lining the gut called “mast cells”. This causes an increase in local inflammation and that in turn leads to leaky gut, microbial imbalance and may even trigger autoimmune conditions.

How Gut Problems Cause Brain Problems

In a recent article published in Frontiers of Neuroscience in March of 2016 entitled Bread and other Edible Agents of Mental Disease the authors Bressan and Kramer do  a wonderful job of detailing the mechanisms by which a disruption of the gut ecosystem can lead to food intolerance, sensitivity and allergy.

They also clearly point out how several food proteins, particularly gluten from wheat and casein from dairy can trigger brain inflammation and lead to brain dysfunction. This dysfunction may manifest as migraine headaches, attention deficit, hyperactivity, brain fog, depression, anxiety, autism and even schizophrenia.

In the presence of inflammation and the wrong bacterial environment, the body produces a protein called “zonulin” which serves to widen the gap between the cells of the intestine so that more water can enter the gut and flush the microbes out. Unfortunately this protein increases the permeability of the gut barrier as well as the blood brain barrier. This allows an increased exposure of the brain to toxins.

To add insult to injury, certain breakdown products of the digestion of gluten and dairy can have opiate effects similar to morphine. These compounds have powerful effects in causing us to crave gluten and dairy containing foods, despite the fact that they are causing harm to the body.

Antibodies to gluten have been found to be highly correlated with both schizophrenia and autism in a number of studies, including a study by Cade et al. in 2000 that showed that gluten antibodies in 87% of autistic children vs 1% of healthy controls.

The gut is also home to 80% of our immune system because it is the primary area where we interact with potentially harmful bacteria, yeast, mold and parasites. An unhealthy gut that is already a bit leaky becomes a safe harbor for infections. Some harmful bacteria create a byproduct called lipopolysaccaride (LPS) and this LPS then enters the blood stream and can travel to distant sites like the brain where it triggers the brains powerful immune cells called glial cells. LPS has been shown to play a role in the reduction of serotonin, reduction in dopamine neurons, decreased blood flow to the brain, seizures, damage to the protective covering around nerve cells called myelin and a host of other things including autism. You can link to some of these studies here

You Can Stop the Effects of Stress

In my clinical experience I have seen this pattern time and time again. Each time I have a patient who complains of anxiety, depression, ADHD/ADD, migraine headaches, tremors, restless legs or even PTSD, I encourage them to work on healing their gut, test for reactivity to gluten and dairy, hunt for hidden infections, and begin a program that will get their mental and physical stress levels down.

There is no drug that can treat the root of these problems and it can take time and great effort to heal but it can be done and it is worth all of the effort. I can’t tell you how many patients have been able to get off of their medications and feel like themselves again.

If you have concerns about yourself or a loved one, schedule a consultation and we can dive in to your specific situation, determine appropriate testing and get you on your road to health.