Should I Avoid Gluten? Part 1 of 3 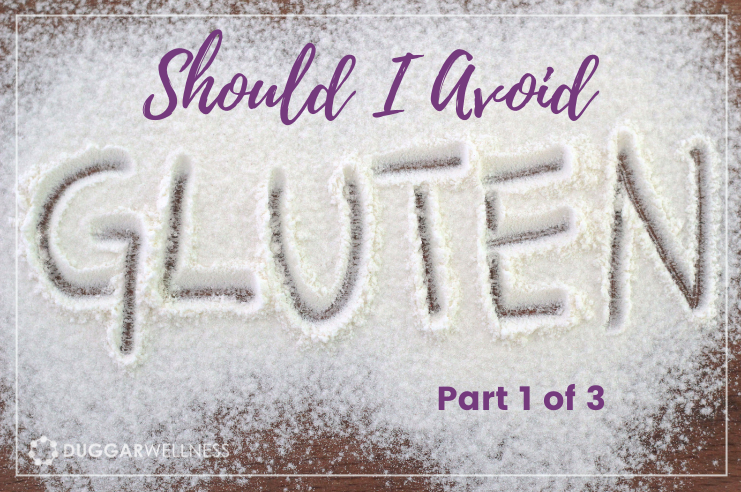 Should I avoid gluten?  This is a question I get asked a lot by those I teach and coach.  Before I answer those questions let’s first define what gluten is.

The science of wheat-related disorders is exploding right now and we are learning more and more about the components of wheat that can cause problems for people.  That being said, the chief culprit remains a protein in wheat called “Gluten” (it’s Latin for the word “glue”).

Gluten is what gives bread its airy and fluffy texture and dough its sticky texture. Although all grains have proteins similar to gluten, the specific problem protein for most people is found in wheat, rye, and barley.

Should I avoid gluten?

Probably the most common reason for someone to avoid gluten is a diagnosis of celiac disease. Celiac disease is an auto-immune disorder that targets the small intestine.

When a person with celiac disease eats gluten, his or her body cannot break it down and treats it as a foreign invader.  This causes inflammation in the tissue of the small intestine. The inflammation irritates and damages the villi (tiny finger-like projections that aid in nutrient absorption) lining the small intestine.   Without those villi, you have considerably less surface area with which to absorb the nutrients from your food. This leads to symptoms of malabsorption, including chronic fatigue, neurological disorders, nutrient deficiencies, anemia, nausea, skin rashes, depression, and more.

There is no known cure for celiac disease and the medical treatment is simply to eat a gluten-free diet. This may sound like a harsh “life sentence”, especially if you are new to it.  Don’t be discouraged though. If you have celiac disease, you have a serious, life-threatening disease that can be greatly improved without dangerous drugs or surgery. That is a great thing.  Simply change what you eat, focus on healing your digestive tract and your body will heal itself.

Gluten intolerance and gluten sensitivity are non-specific terms used to describe cases where individuals suffer a negative reaction to eating gluten but, according to current medical definitions, do not have celiac disease.  Gluten intolerance or sensitivity can cause inflammation and irritation throughout the body.

This intolerance manifests in physical symptoms like joint pain, digestive distress, including bloating, constipation, diarrhea.  Symptoms of skin irritations like acne, rashes, or dry patches are also common.  Many suffer brain symptoms like fatigue, headaches, and mental and emotional symptoms like brain fog and mood swings, including rage and depression.

Research now shows that all humans who eat gluten will suffer from damage in the gut every time they eat gluten.  This is called intestinal permeability or Leaky Gut.  The body is constantly repairing this damage but in some people, the damage occurs more often than the body can heal and then people begin to experience symptoms listed above.

Often times when people experience these symptoms they don’t think to look at what they are eating as the cause.

Many people think that gluten sensitivity is a diet trend and that eventually, it will just pass.  There is much more to gluten sensitivity than many people know.  Dr. Tom O’Bryan is an internationally recognized leader on the complications of Celiac Disease and Non-Celiac Gluten Sensitivity in this interview he outlines why this is not a fad but is backed up by scientific research.

Do you want to continue reading and learning about gluten?

See Part 2: How do I recognize gluten?

Part 3: How do I replace gluten?