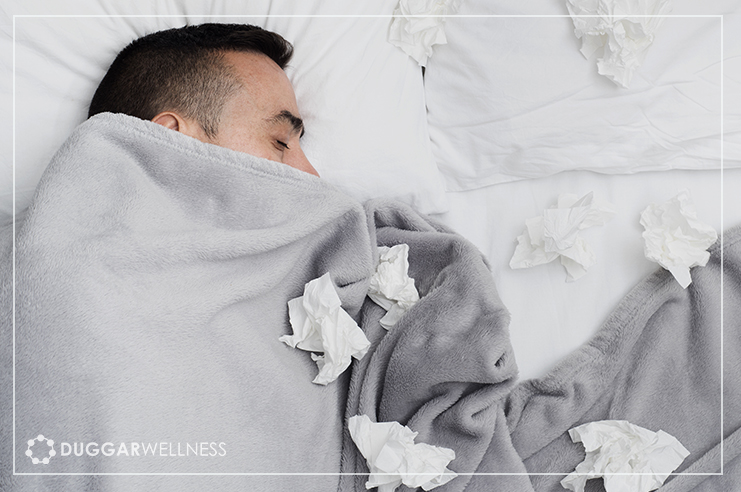 They say that flu season is upon us….(‘they’ being the pharmaceutical companies that produce influenza vaccines.)

So, upon hearing this, millions of Americans rush to get their annual flu shot to ensure health and well being during the winter/flu season. Yet we’ve all heard about people who are hospitalized from a bad reaction or end up getting the flu even after being vaccinated…why is this?

Some people can have have a bad or allergic reaction to the preservatives and chemicals in the flu shot. Researchers have also found that repeated flu shots may actually lower your natural antibody levels – which ends up making you more susceptible to the infection. Isn’t that a little backwards?

Dr. Hugh Fudenburg M.D., the world’s leading immunolgeneticist and one of the most published biologists of our times states;

If an individual has had 5 consecutive flu shots, his or her chances of getting Alzheimer’s Disease is 10 times higher than if they have had 1, 2 or none. This is due to the mercury and aluminum in every flu shot. The gradual mercury and aluminum build up in the brain causes cognitive dysfunction.

Wow! I find that fascinating.

Much research has been done in recent years regarding inflammation and the negative impact that chronic inflammation has on many body systems. A recent research article published in 2018 backs up Dr. Fudenburg’s claim. This research states that the synergistic effect of murcury and aluminum increases the pro-inflammatory activator complex which is a precursor to pathogenic gene expression and is known to drive inflammatory neurodegeneration and progressive age-related functional decline, thus upsetting the normal, homeostatic operation of the central nervous system.

Vaccination is a highly polarized and controversial issue. However, the inflormation about the ineffectiveness of the flu shot is out there and the evidence is relatively straightforward. It’s just not being openly shared or is it as marketable as the flu season propaganda.

To learn more for yourself about how to reconcile the incessant promotion of the flu shot by medical “authorities” In this podcast episode you’ll learn what the scientific literature actually says about influenza vaccine and how you can make an informed decision for yourself and your family.

This is where I stand:

Instead of injecting poisons and toxins into your body this year, improve your immune system with chiropractic wellness care and make more of an effort to live a healthier lifestyle!