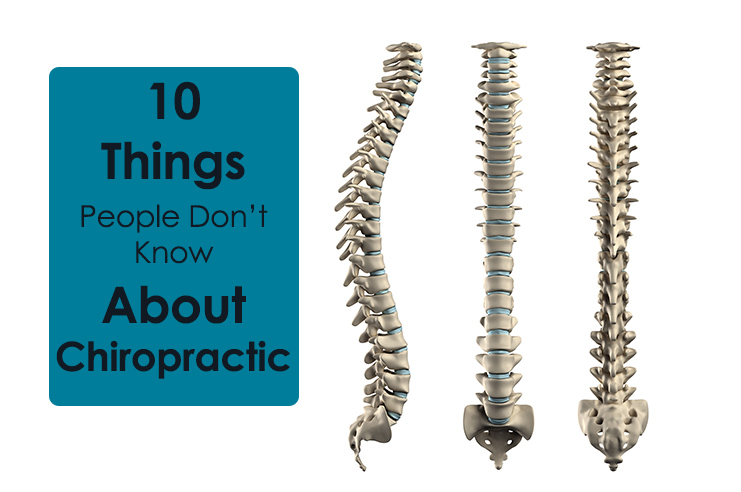 When I first started chiropractic practice nearly 20 years ago, I noticed that there were a lot of people who didn’t really know much about chiropractic. Since then, the average person seems to know quite a bit more about what I do but I’m still surprised that chiropractic is still so misunderstood. It seems that there are a bunch of myths that surround chiropractic care that continues to linger around year after year almost as part of the collective unconscious of the population.

In an effort to really help you understand how chiropractic differentiates itself from other types of health care, I wanted to share 10 interesting facts that might not be very well understood by your friends and neighbors.

1. Pain is the last symptom of dysfunction.

A patient’s spine is often restricted or unstable for months or years before it presents as a “back problem” and they show up in a chiropractor’s office because they woke up that morning and couldn’t move. It is also important to note that, the absence of pain is not health. While medication may be necessary in some cases if you take a pill and the pain goes away, the dysfunction that caused the pain still exists. Muscle, ligament, and joint injuries often occur as a result of long-term biomechanical dysfunction, sometimes from past injuries, making the area more susceptible to future injury. Patients are often a bit surprised when I tell them that their problem has been lurking, unknown to them, for 1,5, 10 years or longer. They are also sometimes surprised to learn that many people come in to see me even though they don’t hurt any longer. They are trying to get to the root of the problem and prevent it from coming back. This “wellness” approach is completely safe and makes total sense and these patients swear by the positive impact on their lives.

2. Athletes use chiropractors to stay well and perform better, not just for the occasional injury.

Virtually every professional athletic team has a chiropractor on staff to not only treat the occasional injury but to actually help prevent them in the first place. Chiropractors are movement specialists. We can tune up the body to perform at its highest levels. Chiropractors play a prominent role in sporting events at every echelon of sports from high school to the Olympics.

3. The body does not perform as a cluster of separate mechanisms, but rather a cascade of events that all starts with proper control by the nervous system.

The nerves that travel through and control every function of your body originate at the spinal cord and their transmission may be disrupted if the joints of the surrounding spinal column are not moving properly. This disruption in alignment, combined with the changes in how the body functions in that area are what chiropractors call a “subluxation”. Below is a chart that illustrates the relationship of the spinal nerves exiting the vertebra branching off to the various organ systems. You can see why it is not uncommon for a chiropractor to treat a patient with mid-back pain that may be causing that person’s irritable bowel system or a patient with a subluxation in the sacral region who has been unsuccessful in trying to conceive, or a patient with an upper back fixation that also has acid reflux.

4. Doctors don’t do the healing.

Sorry to disappoint you, but the job of a doctor isn’t to “heal” you. Your body heals itself. The best a doctor can do is to help facilitate that process. As a chiropractor, I work to restore proper motion in the joints, which relieves tension on the nerves and muscles and allows your body to do the healing that it is inherently made to do. Chiropractors believe that the body is a perfect organism in its natural state, and all disease comes from a disruption in the body’s proper transmission of signals by the nerves which affects its ability to heal and to defend against disease-causing agents. We never treat disease. We start by assessing which spinal levels are experiencing dysfunction and we perform an adjustment to restore proper nerve flow so the nervous system may work as efficiently and effectively as possible.

5. Chiropractic is for all ages.

Many seniors aren’t aware of the benefits of chiropractic care which can help them not only with pain relief, but also increase range of motion, balance and coordination, and decrease joint degeneration. I love helping my senior patients get the very most out of their life by keeping them moving and active.

There’s no patient too young for chiropractic either! Chiropractors check infants moments after birth for misalignments of the upper vertebrae that may occur as a result of the birth process. In addition to supporting overall health and well-being, parents also take their children to chiropractors to encourage healthy brain and nervous system development, to assist with colic, asthma, allergies, bed-wetting and sleeping problems, and to assist with behavioral disorders.

6. We know a lot more than just the spine!

Many people have no idea that chiropractors are so well qualified to give expert advice on nutrition, fitness, ergonomics, and lifestyle, screen for conditions unrelated to the musculoskeletal system, and refer out to other practitioners when necessary. Chiropractors are also able to complete specialties in other areas such as pediatrics, sports rehabilitation, neurology, clinical nutrition, and addictions and compulsive disorders.

Take a look at how a chiropractor’s educational requirements stack up against medical education. Other than particular specialties and the differences in learning to adjust and learning to prescribe medication, our training hours are not dissimilar from that of a medical doctors.

When somebody says that they tried chiropractic and it didn’t help, I cringe and get the feeling that they really missed the boat. Of course, there are cases with complicating factors, but I have heard this from people with simple and straightforward chiropractic problems and it is often very clear what has happened. They didn’t understand the nature of their condition and what it was going to require them to correct it. In most cases, one doesn’t acquire back pain overnight, and it’s not going to go away overnight. If a weak core from years of sitting at your desk is to blame for the additional stress on your joints, I wouldn’t expect one adjustment to solve the problem. A comprehensive approach would include a series of adjustments, in-office and home-based exercises, nutritional advice, and natural approaches to address inflammation. In short, there are lifestyle factors that the patient has to address if they want a long-term solution. Sure, I’m always happy to adjust someone and make a living, but if you’ve been given homework and you don’t do it, don’t say chiropractic didn’t work when you’re feeling poorly again!

8. Chiropractic may help you get sick less.

Studies have indicated that adjustments consistently reduce the production of pro-inflammatory chemicals associated with tissue damage and pain, and may also enhance the function of the immune system defense. As far back as the deadly flu pandemic of 1917-1918, chiropractors noticed that their patients seemed to have fewer fatalities than among the general population and were able to publish their work in an osteopathic journal since no scholarly journals were accepting chiropractic data. The estimated death rate among patients of conventional medical care in the U.S. was estimated at 5 to 6 percent while the fatality rate among influenza cases receiving spinal adjustments from chiropractors was only 0.25%!

I see this in my practice all the time. In fact, when a person calls in to cancel their appointment because they are starting to feel sick, we often tell them that coming in for their adjustment might be the best thing they can do to fight off the illness.

There are a few myths that people associate with going to see a chiropractor. Some people think that chiropractic becomes psychologically addictive. This is a little more complex of an answer. What I have noticed over the years is that once people know just how quickly chiropractic can improve function and help them heal from minor injuries, they simply don’t tolerate living in pain. I can’t blame them. I once helped a patient who couldn’t move her finger for over 6 years. She had seen several doctors with no diagnosis or solution. I adjusted her wrist and 10 seconds later, her finger worked. Try to keep that patient from coming back for the rest of her body’s malfunctions to be fixed! We had a long list to work through before she eventually moved away. Chiropractic is about as addicting as eating veggies. You eat your veggies because they make you feel better than when you don’t eat them. Same with chiropractic.

I want you to come in for a lifetime because you understand that everything in your life that has working, moving parts needs to be maintained. Your car, your computer, your home

There is no bone snapping or warrior-style pulling heads off spinal columns! The neck adjustment some chiropractors use causes anticipation for many new patients, but is actually much more gentle than they imagined, and involves a quick, direct thrust to a specific spinal joint. The sound an adjustment makes is called a cavitation and is only space being created within the joint causing gasses to be released from the joint capsule, which creates the popping or cracking noise. Chiropractic adjustments will not wear out your joints, as some imagine because they have been warned not to “crack their knuckles” for this reason in the past. Adjustments, unlike “knuckle cracking” or having your friend stomp on you while you lay on the carpet, are applied specifically to improve the motion of your joints and limit the small dysfunctions that over time can lead to arthritis. Most people after an adjustment describe the feeling as being “lighter”, having greater ease in moving the body, and being able to stand up taller.

When was your last adjustment?