Why Your Antacids Will Never Cure Your Heartburn 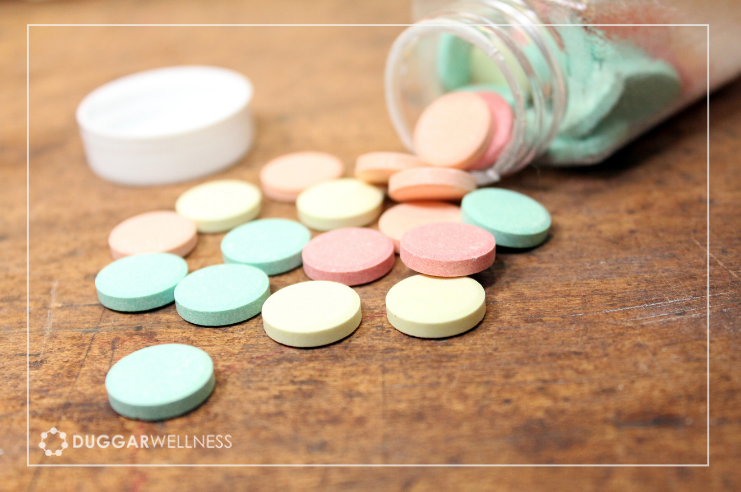 As a functional medicine specialist I tend to see my fair share of people with digestive problems. One of the main issues that we see is heartburn. Over 100 million people in America are taking antacids and more powerful acid suppressing medications every month. I briefly touched on this topic in a recent blog post where I covered a broad spectrum of digestive issues. Let’s dive a little deeper into this problem.

What’s Wrong with the Current Approach?

The standard of care in the medical model is unfortunately often only designed to treat symptoms and little is done to address the cause of the problem. Even worse, some treatments actually make the underlying cause worse than it was to start with. Heartburn and reflux are classic examples of this problem. The most common protocol for these conditions involves taking pills like Tums, Rolaids or Alka-Seltzer to neutralize stomach acid. When that doesn’t work, the next step for most people move is to take acid suppressing drugs like Nexium, Prilosec or Zantac. While these drugs are effective in reducing the symptoms of reflux, they don’t come close to addressing the cause of the problem.

What is the Underlying Cause?

So what is really going on inside the bellies of people suffering from acid reflux/heartburn and GERD (gastroesophageal reflux disease)?

As one of my functional nutrition mentors, Reed Davis explains it,

“The pain associated with heartburn is caused by stomach acid backing up into the esophagus through the valve at the entry point of the stomach. The lining of the esophagus is not able to handle the extreme acidity of stomach acid, and because of this, acid reflux can cause considerable damage and lead to ulceration and even cancer. It’s commonly believed that acid reflux is caused by excess production of stomach acid, but when you take a closer look at how the stomach functions, this doesn’t make any sense at all.

The production of stomach acid naturally declines with age. In fact, we produce about half as much stomach acid by the time we’re in our forties as we did in our teens. Despite this decline, the incidence of acid reflux increases considerably with age. If acid reflux is far more common with older people who are producing less stomach acid, then how could excessive acid production possibly be the cause?

Children and teenagers tend to produce much more stomach acid than adults and have a very low incidence of acid reflux. As such, it’s obvious that the stomach is very capable of containing high levels of acid without any reflux into the esophagus or symptoms of heartburn.

A better explanation of acid reflux is based on the function of the lower esophageal sphincter which is the valve that separates the stomach from the esophagus. As long as this valve is functioning properly, it will prevent stomach acid from refluxing into the esophagus. However, if it’s function is impaired, stomach acid can much more easily make its way into the esophagus and cause painful damage to it’s lining. Ironically, impaired function of the lower esophageal sphincter is often associated with low levels of stomach acid which completely contradicts the basis for conventional heartburn and acid reflux treatments. While there are some cases of acid reflux that are caused by excessive amounts of stomach acid, it’s very rare.”

Stomach Acid is So Important

The role of stomach acid is to break down the food we eat into small molecules that are absorbed by the intestines and distributed throughout the body. This absorption, which is critical to our health, can only occur when an adequate amount of stomach acid is available to create an acidic environment in the small intestine.

That means that when stomach acid is low, nutrients aren’t able to be absorbed and utilized, leading to a state of relative malnutrition, even if the person is overweight. Diseases such as osteoporosis, heart disease, anemia and cancer can be related to malabsorption of nutrients caused by low stomach acid. This is even the case with supplements. When people tell me that they get a stomach ache after taking supplements it is almost like a positive diagnostic test for low stomach acid.

When we don’t absorb proteins well, we can end up with amino acid deficiencies which can lead to neurotransmitter imbalances, depression, anxiety and ADD.

In addition, when we have low stomach acid, this puts us at greater risk for infections. Bacteria and parasites that enter from our food should be killed in the harsh acidity of the stomach but if this is decreased, they can survive and take up residence inside of our systems. In a nasty twist of nature, one common bacteria can take hold inside of our stomach and actually become a cause of lowered production of acid. H. Pylori infections are often the cause of ulcers and need to be eradicated before we can significantly improve the health of the gut.

6 Natural Ways to Create Acid Balance in the Stomach

The best way to avoid heartburn and prevent acid reflux is to support proper function of the lower esophageal sphincter. The following are some practical ways to do this.

Dehydration can lead to acid reflux by causing the lower esophageal sphincter to relax but drinking lots of water with meals can actually dilute the concentration of stomach acids.

Avoid Foods and Beverages That Can Weaken the Lower Esophageal Sphincter

Excessively large meals put pressure on the lower esophageal sphincter and encourage it to open when it shouldn’t.
For the same reason why you shouldn’t overeat, you should also avoid anything that increases intra-abdominal pressure such as bending, heavy lifting and tight clothing after eating meals.
Elevate the head of your bed by 4 to 8 inches while you sleep. This will keep gravity working in your favor and make it less likely for stomach acid to drain into the esophagus.

Get tested for food sensitivities and avoid the reactive foods that may be interfering with the function of the lower esophageal sphincter. If it’s not practical for you to get tested, at least consider a trial of eliminating grains and dairy from your diet. These are the two most likely food groups to cause sensitivities. It’s also helpful to avoid foods and beverages that can irritate the lining of the esophagus. This includes citrus fruits, tomatoes, spicy foods, coffee and carbonated beverages.

The nerve supply to the lower esophageal sphincter comes from the Vagus nerve that exists the skull right up at the top of the neck. Research has shown that subluxations (misalignments) of the upper neck can cause irritation to that nerve and compromise stomach and esophagus function.
Take HCL Supplements. This is a fairly simple step for the vast majority of people. Taking a broad spectrum digestive enzyme with HCL in it can often eliminate heartburn in a matter of days.

Please contact the office directly if you would like a specific dosing instructions, as it is possible to irritate the stomach by taking too much HCL. As in all things, finding the balance is critical. Also, it doesn’t make sense to be taking antacids and proton pump inhibitors at the same time as HCL supplements as they have opposing effects.