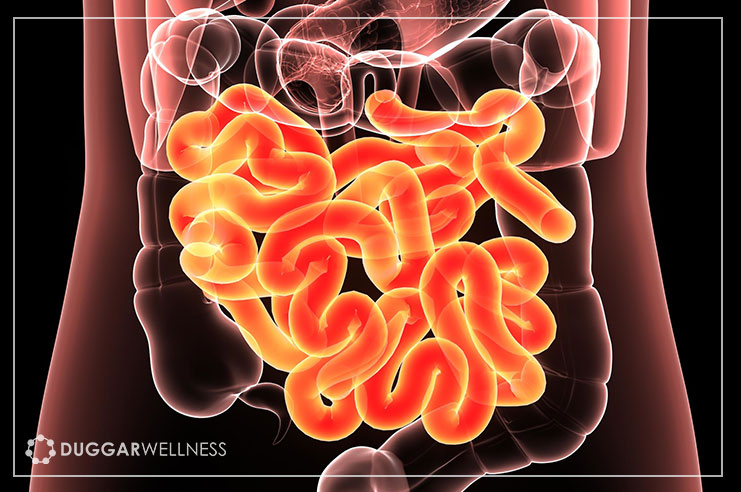 Just about every day in clinical practice I have the opportunity to teach patients about the role their digestive system plays in the grand scheme of their health. Of course, when a patient is coming in for a typical digestive complaint, like bloating, heartburn, constipation or diarrhea, that is an obvious connection. But when the person is coming in with skin problems, fatigue, stubborn weight issues, depression or brain fog, they are often surprised that our discussion quickly turns to the state of affairs in their guts. I’ve blogged about the gut-brain connection here, here and discussed other gut related health issues here and here.

Today however I want to dive in to a very critical condition called SIBO. SIBO stands for Small Intestinal Bacterial Overgrowth. Recent research has concluded that at up to 80% of cases of Irritable Bowel Syndrome are caused by this overgrowth of bacteria in the small intestine so we’re talking about 35 million Americans who are dealing with this phenomenon.

Let’s Get Acquainted with the Upper GI tract

When you think about it, the entire digestive system is just a long hollow tube that stretches from the mouth to the anus. But along the way there are distinct areas that have completely different physiology and function based on what processes need to happen in that location.

When we take a bite of food, our teeth and saliva begin the digestion process and then our food moves through the esophagus and into the acidic environment of the stomach. The acids and enzymes of the stomach churn and mix the food into a thick semi-fluid mass called chyme. After a few hours (the length of time for food to transit the stomach and other organs varies quite a bit from person to person and from meal to meal), that acidic bolus of food moves into the small intestine for further processing.

The small intestine is an amazing organ. It stretches an average of 20 feet and is much longer than the large intestine (it’s only called “small” because of its diameter). The work that takes place in the small intestine is responsible for so many aspects of our health because that is where almost all nutrients are absorbed that keep us alive.

In addition to breaking down foods into their smallest components (digestion), the small intestine is also the key battle ground of our entire immune system.

While there are literally trillions of bacteria that live on and in our bodies, the small intestine is designed to be relatively sterile – especially in relation to the large intestine which is a veritable haven for bacteria.

As I mentioned above, SIBO is simply an overgrowth of bacteria in the small intestine where they shouldn’t be. Bacteria need to eat just like we do. In fact, that is one way that bacteria help us to be healthy. In the large intestine, bacteria help us digest foods, create vitamins, short-chain fatty acids and other helpful compounds that keep us vital. Maintaining a healthy microbiome is essential for a balanced immune system.

But when these bacteria are in the wrong place, they can create havoc. One of the best understood mechanisms of damage has to do with the fact that these bacteria like to feed on sugars and starches in our diets. When bacteria eat a sugar, they produce the byproduct of gas, namely hydrogen and methane, and when there is an overgrowth of bacteria and abundant sugar, starch and fiber in the diet, the over production of these gasses is what causes burping, flatulence, bloating, heartburn as well as diarrhea, constipation and often intense abdominal pain.

SIBO Can Cause Leaky Gut and More

SIBO has been proven to have a negative effect on not only the way the cells of the small intestine work but can actually change their structure. The damage to these cells dramatically affects their ability to absorb nutrients, especially protein, B12, folate, iron, vitamin A and D. In addition, this damage can cause microscopic openings in the cells so that partially digested foods can leak into the blood stream. This is called leaky gut. Leaky gut has been clearly shown to affect autoimmunity, fibromyalgia, brain issues and overall systemic inflammation.

Many causes of SIBO?

One of the major benefits of having a highly acidic stomach environment is that it is very hard for most bacteria to survive in the presence of that pH level. Unfortunately, many American’s diet and lifestyles actually create a condition that lowers the acidity of the stomach. Taking antacid medications can allow the bacteria that are naturally on our foods to survive into the small intestine.

In addition, our nerve system is responsible for sending messages to the smooth muscles of the small intestine to create a wave of contraction that moves our foods downward. This action is controlled by what is called the Migrating Motor Complex. It is a gentle, sweeping action that moves through the bowel to push everything into the large intestine. If anything happens to stop the migrating motor complex, it can have the effect of allowing bacteria to take up residence in the small intestine.

In addition, the sections of our digestive tract are separated by powerful muscular sphincter muscles that are supposed to open and shut so that allows the contents to move through but prevent them from refluxing back upwards. One very important valve is at the end of the small intestine. It is called the ileocecal valve and it is situated right at the juncture between the small and large intestine. It is a major gatekeeper for bacteria to stay down in the large intestine. Sometimes that valve can be damaged or just stuck open and that allows bacteria to migrate “upstream”.

Many people have more than one of the above mechanisms at play in their life and that is what makes treatment of SIBO pretty complex.

How is SIBO Diagnosed?

The only validated test for SIBO is a lactulose or glucose breath test. This test is quite non-invasive and can easily be done with a special test kit right in your own home. A very specific diet is eaten from morning until early evening on the day prior to testing, then the patient does a complete food fast for at least 12 hours (over-night) to ensure that there is no food in the small intestine. The patient then drinks a sugary solution and takes a breath sample every 20 minutes for 3 hours. As the sugar solution works its way through the digestive system, the bacteria feed on it and produce gases that are absorbed into the blood stream and exhaled out of the lungs. The level of gasses can be measured and plotted on a graph to determine if excess bacteria are present. There are a small handful of laboratories that provide this test but we prefer Biohealth laboratories. The test is approximately $200.

How do we treat SIBO?

Researchers have been testing methods to treat SIBO for some time now. There are essentially 3 main approaches that have been shown to be effective in most cases.

Although general, broad-spectrum antibiotics are actually one of the risk factors for developing SIBO, there are some antibiotics that are very specific for the small intestine that have been shown to be great at knocking down overgrowth. The most widely used antibiotic is called Rifaximin. It has published studies showing that it is effective in treating diarrhea predominant IBS (also called IBS-D) so if a person has persistent diarrhea caused by SIBO, your doctor may be able to write a prescription for Rifaximin and have it covered by insurance. That is an important discussion because the cash price for a 2 week round of Rifaximin is over $1,000.00.

Another approach to killing off the bacterial overgrowth is to essentially starve them out. Researchers postulated that if they were to give a patient with SIBO a liquid diet that essentially had already broken down the foods into their most simple forms, the digestive system could get a much-needed rest and because all of the nutrients would be absorbed so quickly, there wouldn’t be enough around to feed the bacteria. This is a very effective approach for many people, but it requires mixing up a powder with water for every meal and snack for between 2 and 3 weeks. It is surprisingly effective treatment, but the downside is that it can be pretty challenging psychologically to only drink the same drink for that long.

Many herbs from around the world have been shown to be very effective in killing bacterial, yeast and parasites in the digestive tract. Some of the most widely used natural remedies and herbs include:

These herbal and natural products in combination have excellent clinical outcomes that rival if not beat the prescription antibiotics and elemental diet so they are often our first choice of treatment.

Why SIBO can be difficult to treat

Even with the best treatment options above, numerous studies (here and here) show that the recurrence rate of SIBO is quite high – up to 50% within 1 year.

What that implies is that just getting rid of the bacteria is only a partial solution, we need to include treatment aimed at the underlying cause. In addition, taking a big picture view of the overall health of the patient may yield even more benefit than just trying to kill bacteria. For instance, we know that there are other conditions that cause a sluggish digestive system like hypothyroidism. If that isn’t treated, it is a risk factor for the return of the overgrowth.

Diet is also a key factor in the management of SIBO relapse. Specific diets, like the low FODMAP diet, the Specific Carbohydrate Diet and the GAPS diet have been effective at controlling the symptoms of SIBO by restricting the types of starches that feed these bacteria, thus keeping their numbers in check.

The research in the field of SIBO continues to pour in virtually every month now so we are hopeful for many more advances in the diagnosis and treatment of this very common, but very misunderstood condition.

If you have a friend or a loved one who is suffering from digestive health issues, please share this article with them.