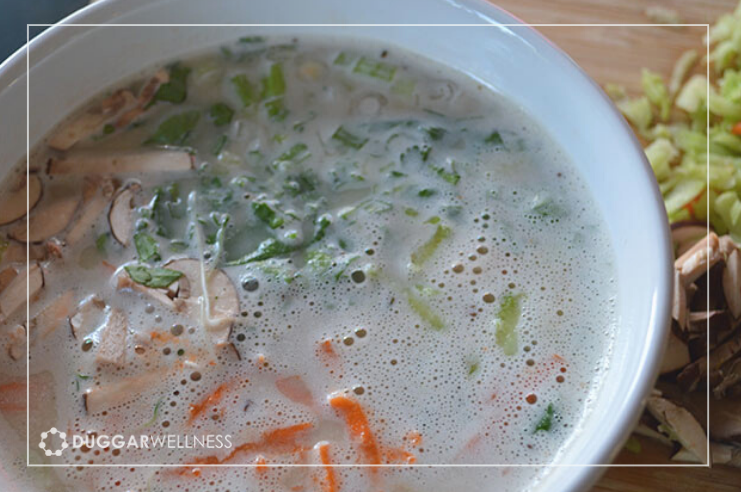 This soup begins with a wonderful mushroom broth infused with all the medicinal properties of the shiitake and crimini mushrooms. You can then use this broth to make magic mushroom soup by adding in fresh veggies that are also loaded with healing nutrients.

Miso: A fermented paste made of soybeans. It is an enzyme rich food that is effective at helping the body to detoxify. It is a complete protein, aids in digestion and increases the beneficial bacteria of the gut as well as helps to strengthen the immune system.

Hemp Hearts: Contain an ideal ratio of omega 6 and omega 3 fatty acids, this fights inflammation. They are a complete protein and are rich in bone building minerals like calcium and magnesium. They are high in Vitamin E for healthy hair, skin and nails. They also help slow down the absorption of sugar to maintain even blood sugar levels.

Carrots: Carrots are high in beta-carotene which can be converted in the body to vitamin A which is essential to help maintain healthy eyesight. Carrots are also rich in carotenoids which help regulate blood sugar.

Sprouts: Contain large doses of chlorophyll, a powerful blood cleanser and builder. It replenishes and increases red blood cells and their ability to carry and deliver oxygen. It also reduces inflammation, calms the nervous system, revitalizes tissues and balances the pH levels in our body.

1 bunch cilantro, use stems only, reserve leaves for later

Wash and cut the celery into thirds.

Wash and cut mushrooms in half.

Scrub or peel ginger and cut into thick coin-like slices.

Peel garlic and cut in half.

In a blender combine 1 cup mushroom broth with miso and hemp hearts. Blend until smooth. Pour into remaining broth and stir until combined.

For the Mushroom Broth

Bring to a boil. Reduce heat and simmer for 1-2 hours. The longer it simmers the richer the flavor will be.

While broth is simmering prepare the magic list of veggies.

Strain broth through a sieve and return to the pot over medium-low heat. Discard simmered veggie mixture- all their nutrients are in the broth anyway.

While broth is simmering prepare the magic list of veggies.

Place your choice of veggies into a large bowl and cover with hot broth. The broth will lightly steam the veggies and they will add a delicious crisp texture to your soup.